My dad passed away September 19th, 1996. I was doing my clinical year in my Master’s program preparing to be a Family Nurse Practitioner. He had been critically ill  previously that year and was in chronic pain because of long-term steroid use for temporal arteritis. Steroids are used to prevent blindness with this disorder, but steroids are a two-edged sword. His degenerative disc disease caused back pain that had grown harder and harder to control, and he had started taking large of amounts of Tylenol with codeine for relief.

During one of his previous illnesses he had become profoundly hypotensive early on morning, with a blood pressure of 60/40. My mom was asleep in the room while I sat with him, wondering if he would die that night. About 3 in the morning he was awake and looking intently up toward the ceiling. He asked what time it was and then muttered, “What are they doing up there?” Call me crazy, but I think he had a glimpse toward the other side.

Prior to that, I had always believed that he had a near death experience with his second open heart surgery. We were told that they “had trouble getting him off the pump”. When we visited in the CVICU the first time, he was still intubated with all the lines and tubes and such. But he was awake. As we spoke to him, his finger moved restlessly over his right abdomen and groin area. My mom thought he was hurting at the site where they had done his heart cath prior to surgery. But, as I watched closely, it became apparent that he was writing, “I love you.” He had not been a demonstrative father. However, after that surgery, he ended every visit with “I love you.”

The week before he died, he was scheduled for an epidural injection to try to relieve his back pain. But when he presented for the procedure, his INR (the measure of Coumadin activity in his blood–he was on the anticoagulant because of chronic atrial fibrillation with its risk for stroke) was too prolonged. Some people would say his blood was “too thin.” We went back home with his pain unrelieved.

The day before his death I took him and Mom to lunch at a little café in Judsonia. Like I said, I was finishing my clinicals that fall, and Wednesday was my day off. We had lunch and, as I was dropping them off at their house, he reached in his pocket and pressed something into my hand. It was a hundred-dollar bill. “Daddy, I’m fine. I don’t need this,” I protested. He firmly insisted that I take it. “I want you to have it.” He was proud of my efforts to complete my education. He didn’t live to see me graduate.

Early Thursday morning my phone rang. It was Mom calling for help. “Your dad’s coughing up bright red blood–a lot of it. I don’t know what to do.” I hurriedly dressed and drove the short distance to their house, the house I’d grown up in. When I walked in the bedroom, he greeted me with a hoarse, “A man can’t live like this.” He was pale and tremulous and actively coughing up blood. It was 3 in the morning.

I told him whatever he needed to do was all right, that we would be with him. An ambulance was called, and he was transported to the hospital with the request not to resuscitate if his heart stopped. At the hospital we found that, although he had not taken any Coumadin in days, his INR had continued to climb. He was bleeding into his lungs. The doctor said we might be able to slow things down if we gave him platelets and blood and such, but I knew he was ready to go. My mom and I elected comfort care. We stood beside him, holding his hand and talking to him as he wanted to talk, as he was given some medication to keep him comfortable. He was moved to the CCU for his last hours.

His last words to me were, “I love you, more than you know……” and those words have become my words to tell my children and grandchildren and great-grandchild how much they are loved. As he died, my dad raised slightly in the bed and gazed toward the ceiling. As the light left his eyes, I knew he was joining those who had come to take him home with them.

He was at peace, and so was I. But I miss him still. Thank you for being my dad. For loving me and supporting me in all I did. I love you, Dad, more than you know……….

The classic Ringling Brothers Barnum and Bailey Circus gave its last performance last month. How sad! But I am here to tell you that the three-ring circus is alive and well, at least in my life……. 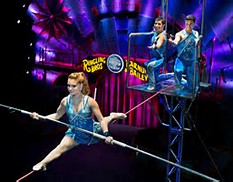 The first ring of my three-ring circus is my role as a tightrope walker. The pressures of living as a baby-boomer, sandwich generation, healthcare professional and aspiring writer keep me precariously balanced. Add to that the pressure of longing to be a Proverbs 31 woman who could care for and provide for her family with the ultimate devotion and skill while serving the Lord and her community selflessly. She lived with a higher purpose, leaving a legacy for her family. She was a master at cultivating family relationships and friendships, old and new, with the ultimate hospitality. And she was to do it all in a 24/7 time frame! Do you think that life is even possible? I find myself constantly longer to be better, accomplish more, live my writing dream. Having impossible goals is not fun! It sets one up for a chronic sense of failure. Even though I know I do accomplish so much, it seems there is always more to be done. My expectations of self set me up to feel inadequate, even as I know that I am doing the best I can. I long to be like a woman of the “greatest generation” who could do so much with so little, for whom hard work was the essence of life. And I have heroes like Mrs. Mildred Sterling, who until just a few years ago was teaching Sunday School as she approached the age of 100 years. Or Mrs. Mary Formby, an extraordinary soul who excelled in intellect, hospitality, grace, and faith. I only hope that at the end of my life I, too, will be able to say as Paul did (and, as Mrs. Formby surely could and as Mrs. Sterling will) :

I have fought the good fight, I have finished the race, I have kept the faith.  2 Timothy 4:7 (NKJV)

The second ring of this circus is the world we live in, kissing danger (kissing the enemy?) every day. Terror attacks across the globe are common. There seems to be a pervasive streak of personal violence across our land, with daily reports of murders across our communities. And then there is the overarching danger associated with foreign powers trying to disrupt our democracy coupled with the “vanishing American adult” mentality (see Ben Sasse’s book by the same name) that has resulted in the election of a president who has never before served in private office, a president who values his own opinion above all others, a president who makes his own rules, and a president who disregards the time-honored protocols of our justice system, proven relationships with our allies, and simple human decency and honesty. His promise to “drain the swamp” is resulting in the formation of a more ominous swamp fueled by ego, nepotism, disregard for human rights and emotions, and a corporate executive, as opposed to statesman, mentality. The system of checks and balances as envisioned by the founding fathers is no longer checking or balancing power.  Political party lines, instead of ethical and moral truths, have become the guiding force in our nation’s capital. There is widespread lack of understanding of basic civic principles and, therefore, a tendency for many across our nation to apathetically ignore or excuse what is happening in the nation’s capital. Ring #2 multiplies the stresses of ring #1 exponentially. My only hope is to trust that God is in control, and that His plan will prevail. 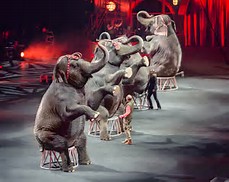 Ring # 3 is perhaps the most tragic. For I am seeing in evangelical circles a tendency toward judging others without remembering that we are all sinners, saved only by the grace of a loving God. In the name of Christianity, believers accept the circus in ring #2 as a demonstration of conservative values at work. I am having a crisis of faith. It is not a crisis of whether or not I believe in God. It is not crisis of doubting my salvation. It is a crisis of not understanding how we can call ourselves Christians while demonstrating and endorsing a judgmental and intolerant mentality. It is a crisis of wondering how God’s family can expect everyone to be alike–well-trained Christians who, unprotesting, “go with the flow” instead of demonstrating truly unconditional love for all God’s children, instead of hating the sin, not the sinner, and instead of recognizing the inherent personal rights this country was founded upon. I resist being the well-trained elephant sitting in the pew, obediently accepting everything said and done, silent about my own convictions.  I don’t want to be a well-trained, docile Christian, who never rocks the boat. Maybe sometimes the boat needs to be rocked. I want to be a thoughtful, kind, loving, and faithful member of God’s family, unafraid to recognize, and, if indicated, speak, the truth. Remember, Jesus said:

“Judge not, that you be not judged. For with what judgment you judge, you will be judged; and with the measure you use, it will be measured back to you.” Matthew 7:1-2 (NKJV)

AND, when questioned about how to punish an adulterous woman,

I, for one, am not without sin. But I am troubled and concerned and tired of the circus. I pray for a change of heart in the United States of America. I pray to turning back, not only to God, but to the fundamental truths of democracy upon which this nation was founded and to ethical and moral behavior. The Ringling Brothers Barnum and Bailey Circus may have closed. Let us not let democracy be the next casualty.

Born-again Christian, mother, grandmother, and great-grandmother, I'm happily married and dreaming the dream of becoming a traditionally published author. Two living children (one lost to suicide), three grandchildren, and three great-grandchildren keep my life interesting. I have learned to embrace life lessons that accompany age, welcoming graying hair and the resilience that comes with experience and faith. Two independently published books to my credit with a third on the way gives voice to the greatest love story of all, Christ's sacrifice on the cross for us. May you be blessed by what you find on this site!