I came across this poem, which is attributed to Pythagoras. (And I just thought he was the mathematical genius who contrived the Pythagorean Theorem!) Here is the version I found:

The little verse struck me as being worth both pondering and applying as sort of a self-assessment. We Americans are all about evaluation and continuous improvement, right? Just consider that we get links to complete satisfaction surveys at the bottom of all fast food receipts, as well as department and discount store receipts. The Chevy place that sold us our cars sends e-mail surveys after every service encounter. (And, when I don’t complete them, they call on the phone!) Hospitals devote money and manpower to tracking and trying to improve patient and family satisfaction.

So, I am setting out to evaluate myself according to Pythagoras’ model.

2. What do I know that’s worth the knowing? Knowing Jesus in a saving relationship is valuable beyond measure. Knowing how to manage money, keep a neat and clean living space, be dependable at work, do my job to the best of my ability (that includes my nursing skill, I think)–these are critical to just surviving, right? Knowing how to get along with people–that’s a big one–and work in a group to accomplish goals. Knowing just how much I DON’T know–there’s the heart of knowledge and wisdom, I think. Your answer?

3. What have I done that’s worth the doing? Giving my heart and life to my Lord, Jesus Christ. Completing my education as a nurse. Teaching a Sunday School class. Raising a family. Marrying the love of my life. Loving and watching after my parents. Meeting my brother Robby after a lifetime apart and becoming the best of friends (there’s quite a story there) and the blessing of having his family as my family now in his absence. Being a superior chooser of children’s books and gifting them to friends and family (she said rather sheepishly!) I’m sure you all have many worthwhile accomplishments. Pat yourselves on the back. Now!

In case you haven’t noticed by now, this self-examination thing can be difficult (when it comes to actually acknowledging the good) and painful (regarding the next two questions, which I face with trepidation).

4. What have I sought that I should have shunned? The fast and easy road to anything that is good. And other things that I’m certainly not confessing to strangers! I am, however, acknowledging certain ugly attitudes and critical thoughts and negative motives that have sometimes characterized my words and actions. I will not press you to answer this one. It hurts.

5. What duties have I left undone? This is a good one, because, although I feel guilty about my times of procrastination or laziness or neglect of the “next best thing” upon which to focus my attention, this one can, in some regard, be rectified. Again, I won’t bore you with the details of my omissions–just be aware that I recognize them. Maybe we can all resolve to do better in this regard!

Life after all is about learning, wherever we go, whatever we hear and see. Life choices and experiences all impact the worth of what we know and the value of deeds done. Human nature drives us to seek what we should shun and leads us to omit duties that should be done. Thank you for bearing with me in my time of self-assessment. May you be blessed by your consideration of this glimpse into Pythagorean philosophy. It spoke to me. 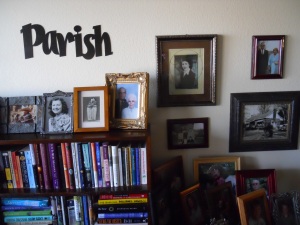 This well-worn paperback was gifted to me in December of 2001, and I began reading it in January of 2002. I have read portions of it every year since. Its cover has been reinforced with tape. Many pages are highlighted and underlined. My copy bears a copyright of 1997.

Just think, it has been my constant companion for over twelve years. I’m not sure what keeps me drawn to it. Its title speaks volumes. It seems I am always in need of reinforced strength, for the daily needs are always there, although they wax and wane in intensity. The book is a compilation of Bible verses (pure King James Version), poetry, and quotations from (I presume) spiritual leaders. Some of the language is rather archaic, and I have seen modernized versions, and have bought a few of the updated volumes as gifts for family and friends, but I tend to prefer the original verbiage.

“It is possible–when the future is dim, when our depressed faculties can form no bright ideas of the perfection and happiness of a better world–it is possible still to cling to the conviction of God’s merciful purpose toward His creatures, of His parental goodness even in suffering. We can still feel that the path of duty, though trodden with a heavy heart, leads to peace. We can still be true to conscience. We can still do our work, resist temptation, be useful, though with diminished energy, and give up our wills, even when we cannot rejoice under God’s mysterious providence. In this patient, though uncheered, obedience, we become prepared for light. The soul gathers force.”
William Ellery Channing (emphasis mine)

It’s not a very cheerful passage, is it? But, more than once over the past 12 years, it has impressed me. Life is not always easy or enjoyable. A friend of mine says that feeling stress gives us reassurance that we are still alive. And now, as I struggle with this transition into truly becoming an accomplished writer (translated PUBLISHED!), which does not at the moment seem to be going my way, Mr. Channing’s admonition was just what I needed. It was the necessary reminder that there is still work to be done. That this is no time to quit. That God does have a plan. And my soul gathers force to persevere.

Of course, writing is not the only path that requires perseverance. The challenges of everyday life require a stubborn stick-to-itiveness. One must keep on keeping on when faced with family illness or estrangement. One must still do the work that needs to be done, whether going to the job and giving a fair day’s work for a day’s pay or cleaning house or cooking meals or balancing the budget. Perhaps the most immediate challenge is finding the will to get out of bed and face the day. One step, one task, one day at a time is what it takes.

So, here I am, sharing this moment, my thoughts with you. And I shall be bold and “publish”. And, just perhaps, it will speak to someone out there who also feels the stress and needs daily strength and hears this challenge to hang in there and keep the faith.

One of the things I quite love about our home is its location. Thirty acres of pasture and woodland and pond grants a world of opportunities to view the lives of both wildlife and domesticated animals. For instance, the above bovine family offers one a bit of a chance to contrast and compare families. In a word, our world is a microcosm of family life across species!

You’ll have to forgive me. I fear that my world view is being “Downton-ized”. My daughter and I are latecomers to the community of Downton Abbey watchers, and we have been playing catch-up with the aid of DVDs of each of the previous seasons. We are firmly established in Season III now, and I find myself constantly thinking about the people, the tragedies, the interplay of politics and religion and aristocracy and servanthood. And, one could never forget the family dynamic–sisters who are crushing each other’s dreams, the dowager duchess who is fearless in her criticisms but surprisingly wise and unerringly funny in her comments, the lessons of a marriage made for money yet resulting in love. There is so much to ponder!

And that introductory note brings me to the story of Daisy, Holly, and Lily, who are pictured above. A little family history must come first. Daisy is a lovely, longhorn mother who has born two beautiful daughters. She has quite striking brown spots. She was born on this land, and, as a young calf, would come to the fence to get me to feed her the tender grass from my side by hand. (You do recollect, don’t you, that the grass is always greener, sweeter, and more tender on the other side of the fence?) Although her horns look quite intimidating, as well they should, she has a very gentle nature and has been the epitome of a good mother to her daughters.

Holly, her firstborn, was conceived through the services of a huge black Brangas (Brahma and Angus) bull. Holly lost the horns, but retained the lovely spots. However, her sire’s contribution to the gene pool resulted in black spots. Holly has been a bit of a trial to us and her mother, as befitting the old term “black sheep” (or cow, as the case may be). I’ll explain shortly.

Then we come to sweet little Lily, named thus because at birth she appeared to be lily white with no spots. In the way of cattle, which is not monogamous by any stretch and operates by virtue of proximity and not loyalty, Lily was fathered by a lovely, creamy white, Charolais bull. As she has progressed into childhood and adolescence, she, too, has developed spots, which are creamy yellow, almost like a light caramel or butterscotch. Much to our surprise, she also has nubbins with the promise of developing horns like her mother.

I alluded to Holly’s miscreant activities. It began with Lily’s birth. Holly, great grown heifer that she was, long weaned from her mother’s milk, saw the young Lily partaking of maternal nourishment. It seems that the memory of the sweet warmth of Daisy’s milk was not long past in Holly’s memory, and, besides, who was this upstart drinking from the fountain of her mother’s udder? Holly quickly relapsed into infantile behavior, pushing Lily aside and draining Mama` quite empty. And so, Holly was banished to a pen by herself. Fortunately, she learned that lesson, and, when reunited with mother and sister, behaved herself, at least regarding nourishment. However, I presume that her teenage hormones and angst took control, and she recently created an opening in the fence on the backside of our pasture, exiting such and meeting up with a friendly bull there. You can guess the rest. She was duly returned home and, before her captors could get back to the other side of the fence, she again was out, dallying with her teenage crush. Once again, the prodigal was returned to her proper home, this time with imprisonment in the pen of her youth.

I say all that, to note this. Arising early one morning, I noted the three of them, lying together where they had rested through the night. And, each morning since then, I have found them thus. And, somehow, in my Downton-ized brain, that struck a chord. Yes, children sometimes disappoint. But, a mother’s love is unconditional and forgiving. And, families stick together. That’s why I love living here. There’s always a lesson in the wonder that surrounds. I hope you experience both the lesson and the wonder of your life today.

Born-again Christian, mother, grandmother, and great-grandmother, I'm happily married and dreaming the dream of becoming a traditionally published author. Two living children (one lost to suicide), three grandchildren, and three great-grandchildren keep my life interesting. I have learned to embrace life lessons that accompany age, welcoming graying hair and the resilience that comes with experience and faith. Three independently published novels give voice to the greatest love story of all, Christ's sacrifice on the cross for us. May you be blessed by what you find on this site!